(This is the fourth entry in the Snippets of Love Series.)

We sat in the kitchen, two strangers, looking through his family photos. Beams of the afternoon sun were streaming through holes in the thatched roof. One ray of sunlight, which had been shining on us this morning, had shifted to the other side of the mosaic-tiled table. It illuminated the end of the baguette we had shared for breakfast hours ago, now left to go stale next to our empty coffee cups.

“This is Ghandi,” he said, flipping to the next photo in his pile.

I expected to see another friend or family member, but when I looked at the photo I saw a black and white goat staring back at me.

“Ghandi?” I asked. “You named your goat Ghandi?”

“Yes.” He pointed up at a painting hanging on the kitchen wall of Ghandi, the person. “Just like the Mahatma. You know Mahatma Ghandi?”

“Well,” he said plainly. “Don’t you think they have the same eyes?” he asked me.

I looked over at him and noticed, for the first in what would be countless times, the ways his cheeks dance with expression when he smiles. Laughter bubbled up from the spring of my heart and I felt time stop. I laughed until tears welled in my eyes and my abdomen ached so much that I gripped my stool to avoid falling.

It was, of course, too late. 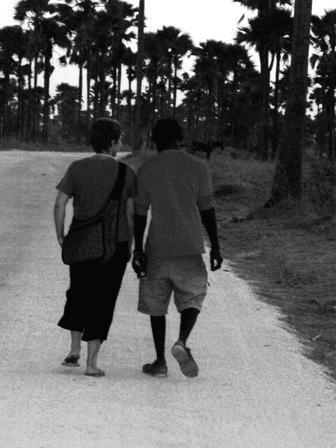