How I Achieved a State of Health To Be Grateful For

Exactly one year ago, I was in the worst health of my life. Today, I am in better shape than when I was a cross-country runner in high school.

I never made the decision to let myself go; it was just a series of life changes that I responded to by forgetting to take care of myself. After Diene moved in, in March 2006, I started skipping workouts to spend time with him and started matching his eating plate-for-plate. (Not a good idea going up against a man with 8% body fat and a metabolism to die for.) I became consumed with trying to help him adjust to life in the United States and get him settled into a job and school. It was stressful and I found a lot of comfort in cheetos and chocolate. Before I realized it, I was fat, had no energy, and felt pretty lousy about myself.

On Dec. 28th, 2006 I was just fed up. I decided to do a 30-day challenge: I would try and run at least 20 minutes every day for 30 consecutive days. On my very first day, I literally ran into my friend Liza, also out running. We ran together for 30 minutes or so, something I could never have done alone. I took it as a sign from the Universe that this was going to work.

For the next 30 days I ran at least twenty minutes each day. One day I arrived at my house as my watch read 19:45 and jogged in place for fifteen seconds. Other days, it seemed effortless and I would be shocked to realize I ran over 40 minutes. Runs #23-30 were in the dark, rainy streets of Utrecht, Holland. I was visiting my sister and was determined to finish the challenge, even on vacation. Every night I bundled up and my sister would bike next to me as I ran through the unfamiliar streets. One of those nights was after a pub-crawl with my mom; another after visiting a coffee shop with my sister. Still, I did it and at the end of the 30-day challenge I felt happier with myself than I had in a long, long time.

I was exercising again, but still eating like crap. I am a vegetarian because I think that choice is better for my health and the health of the planet. But I was ashamed that I was overweight and that the staples in my diet had become Cheetos, Hershey miniatures, Rice Krispie Chocolate Bars, Jays Classic Potato Chips and Soy Delicious Frozen Desserts. Vegetarian? Yes. Healthy? No.

I come from a family plagued by obesity, so I always resigned myself to being overweight, believing I should just be thankful to not be obese. The only times in my adult life that I was happy with my weight were times I was unhappy (after my first semester in college, depressed) or unhealthy (after returning from India, recovering from a 2-week bout of a parasitic dysentery). Clearly, I had some issues to work through and needed a healthy way to do it.

My mom had recently had a lot of success following Weight Watchers and I decided to give it a try. I was so embarrassed that I didn’t tell anyone for months. (Even typing now, I wonder if I’ll have the courage to post this.) Somehow I believed that admitting I was on a diet was going to make people realize that I was fat. The pictures below will show you that it was no secret. I just quietly tracked my intake online, made sure it was less than my output, and started to lose weight. I began getting advice and healthy recipes from vegetarians on the Bulletin Boards. The anonymity was the only thing that allowed me to do it.

A month after running regularly and tracking what I ate, Liza called and told me that she registered for Grandma’s Marathon and that I should too before it fills up. During our runs together, Liza had encouraged me to think about doing a marathon with her. “If you can run 4 miles, you can train and run a marathon,” she said, as though it was a well-known fact. I thought she was being overly kind, but she planted the seed. When she asked me on the phone that day, I said yes. I honestly can’t tell you what made me believe that I could do it. Liza’s encouragement was probably the biggest factor. Having “run marathon” on my list of life goals was another. Perhaps it was the insanity caused by a bleak February in Wisconsin. Whatever it was, I signed up and began following the training program offered on Grandma’s Marathon’s website.

The next 18 weeks were marked by a lot of running, tracking how much I ate, learning to make healthy food choices, screwing up and then forgiving myself. Looking back, what I learned most was that discipline is secondary to self-forgiveness. On the days I chose to put my feet up and watch tv instead of lace up my Brooks, I hated myself. But I had to learn to get over it, because your state of mind perpetuates itself very easily. Think you are a fat, lazy pig and pretty soon you’ll have forgotten the last time you went to the gym. Believe you are healthy athlete and motivating to go for a run becomes much easier.

I spent six months running almost every day and consciously choosing each morsel of fuel I put in my mouth. None of this was easy. Eating too much, sitting too much, watching too much tv – all of these are very easy. They also made me feel like shit. Going for a long run, choosing an apple over chips, turning off the tv to go for a walk – all of these choices require a conscious effort. But choosing health over comfort felt the best. Eventually it began to perpetuate itself, becoming a habit.

There is no secret to becoming healthy. Losing weight is as simple as eating fewer calories than you burn. Running a marathon is as simple as running a little more each week than the week before until you eventually run 26.2 miles. The hard part was learning to believe I was worth the effort.

I am grateful for my health and all the things that helped me achieve it: Diene’s encouragement, supportive friends & family, kind words from friends at work, Brooks running shoes, a mild WI winter, the wwVB, well-plowed bike paths of Madison, and living in a place where I can get bananas and other healthy fresh food all year round.

Below are photos taken almost one year apart – August 2006 on the left and 2007 on the right. Apparently, getting in shape does nothing for camp hair. 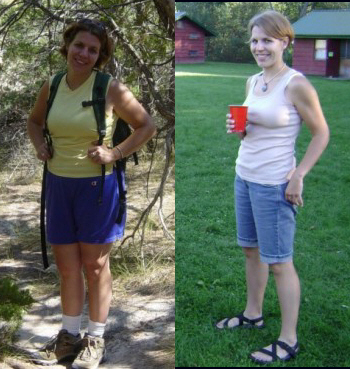